Warning: Parameter 2 to WPE\Site_Preview::the_posts() expected to be a reference, value given in /home/customer/www/foodembrace.com/public_html/wp-includes/class-wp-hook.php on line 303
 October 4th, 2008: Lunch and Dinner | Food Embrace

Wow, yesterday was busy and jam packed! After MT class we had to run to the butcher to pick up our order of meat for Rocks. Then when we got back home we had to separate it out into portions. That usually takes us about 20minutes which isn’t bad for 40lbs of chicken! I was starving and I needed to ASAP. I could not wait until after my shower. So I took off my workout clothes and puttered around in the kitchen heating up lunch in my sports bra and underwear. Hawt! 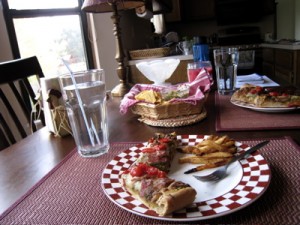 Lunch was leftovers, I had two slices of the pesto pizza, fries from Friday nite, and a couple of bites of the leftover spinach dip. Then I showered and it was out the door to run some more errands. Unfortunately, we didn’t get to do everything I wanted because I got tired and just wanted to go home. :p We went to Target where I scored some really nice running pants for colder weather and a running skirt (!!) that was on sale for $10! With the booty I have, I never thought I would be wearing a running skirt but this one fits perfectly. It’s actually almost a little too big but for 10 bucks I’ll take it. :p Then we had to go to Lowe’s to return some lampshades and pick up different ones for out bedside lamps. I also bought a Martha Stewart magazine. It was the Fall/Halloween addition and it had some really nice ideas. I figured for 5 bucks it was worth the purchase. Then it was off to Garden Ridge so I could get some dish towels and some more Halloween decorations. Imagine my annoyance when most of their Halloween stuff was gone, not because they got bought but because they tossed them to make room for all the Christmas stuff.

Let me just say, I am not one who has issues with seeing xmas stuff out early. Whatever, I like xmas so I don’t mind it being out as long as it’s not crammed down my throat and I’m not being assaulted with xmas music in October. However, when Halloween hasn’t even happened yet, don’t get rid of Halloween decorations just to make room for xmas ones! Grrrr!!! I had plans of doing it up this Halloween but it’s kind of hard when nothing is out anymore. I did get some dish towels though, but not the ones I originally were looking for. I guess they got rid of those too.

Once back home and purchases were put away, Rocks got fed. Then I made us some supper. Just something light since it hadn’t been that long ago when we had lunch. 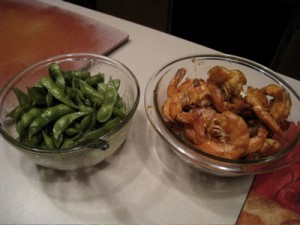 We had shrimp and edamame. There was cocktail sauce for the shrimp and some mocktails as well not photographed. Those got moved to the family room before I could get a pic. :p The first game of the Pens season was yesterday all the way from Stockholm, Sweden. They played the Senators. It started at 2:30 and we taped it since we had so many things to do in the afternoon. We started that as we ate dinner. 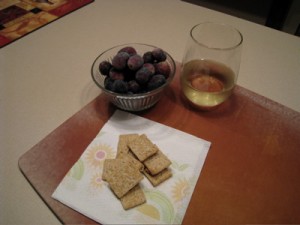 I got quickly bored with dinner. There wasn’t enough going on to keep me interested and it wasn’t filling me up. Once I realized I was bored with it, I stopped eating it and Scott finished what was left. Once that got cleaned up I had a bowl of frozen grapes, some kashi crackers, and a glass of wine. I only had about 3 crackers because Scott ate all the rest!

After the game, I was starting to get tired so we watched two episodes of Earl since they would be short. We have decided to officially give that show up. It used to be good but they have moved too far off the original concept of the show. And I can’t take the character of Joy anymore. Ugh. That show is history. After the two episodes, I hit the sack. Had to get some rest so I could run on Sunday!