Warning: Parameter 2 to WPE\Site_Preview::the_posts() expected to be a reference, value given in /home/customer/www/foodembrace.com/public_html/wp-includes/class-wp-hook.php on line 303
 October 2nd, 2008: Lunch and Dinner | Food Embrace

Hi guys! Kind of a long crazy day today. After breakfast I was moving and shaking around the house cleaning up, cooking, and doing dinner prep work. This was all while I was waiting for Mr. Service Man to come to the house. And then I got hungry because I only had that wee kashi waffle this morning. I couldn’t start lunch because I didn’t know when Mr. Service Man was going to arrive. 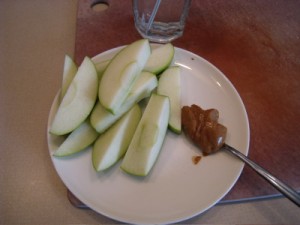 I cut up a green apple and had it with a spoonful of PB. Whoa that apple was tart! I was puckering my mouth the whole time I was eating it. :p It was super juicy too, awesome apple! I ate it all but two slices. Yum! That held me over while I did more cooking. I made some granola (whee!), made pizza dough, and made spinach pesto.

Mr. Service Man arrived as I was doing all that cooking and I am pretty sure he was wondering why I was taking pictures of everything I did. He did his thing and by the time he was gone it was 2pm. :o Needless to say both Scott and I were starving! 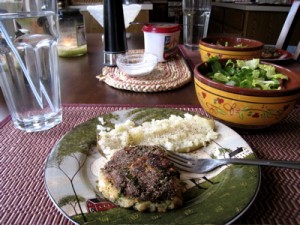 Yummy leftovers! I had a salmon patty and split my remaining half of baked potato with Scott. I had a little bit of butter and S&P on the potato. On the side, I heated up the leftover roasted veggies, tossed them with some romaine, sprinkled that with some red wine vinegar and called that a salad.

I was in clean up mode and cooking mode so I kept at it for a bit and then it was time to get ready for MT. I was a little unsure if we would be going only because Mr. Service Man took out a large chunk of our day. 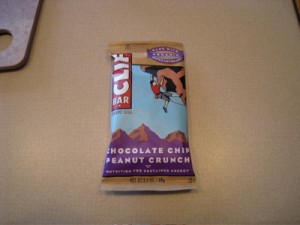 I needed something to eat before MT and decided on this cliff bar. 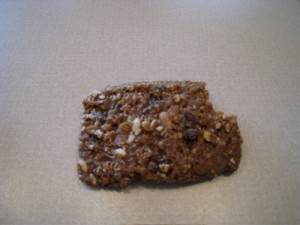 I love you Cliff bar

Holy cow! This is by far my favorite Cliff bar so far! I smelled the peanuts before I even took a bite. It was so yummy. It doesn’t even need the chocolate chips, I could barely taste them anyway. But that’s okay because I was focused on the awesome peanut flavor. Wow! I will for sure be getting this flavor again!

MT was conditioning today and I love how I feel after that class. Like I worked it and kicked butt, such a great feeling. My pizza crust (first time making it!) was rising like crazy and I was anxious to get started on making pizza. Is that silly? 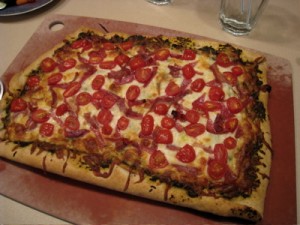 Spinach and sun-dried tomato pesto pizza! The crust is made with bread flour and whole wheat flour. Pesto made with spinach, sun-dried toms, pine nuts, and garlic. No parm because I was putting cheese on top. Also on top is some chopped salami, chopped prosciutto, and some sliced grape tomatoes. 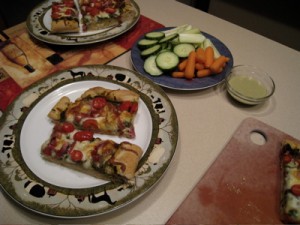 I had two slices with a side of veggies and some WF wasbi dressing for dipping. I ate both pieces minus the edge crust because that’s for Rocks.

Then I had another half piece because this pizza was sooooo good! The crust was crunchy on the outside and soft on the inside, light and so tasty! 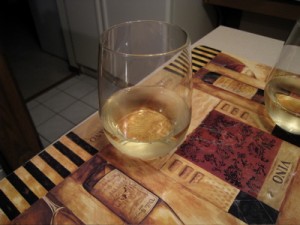 After dinner, it was time to settle down with a glass of wine, do some blogging, and get ready for the VP debate. I’m watching it now as I blog and phew it’s entertaining for sure. Now I’m going to fully relax and shut the computer off. Have a good night guys!