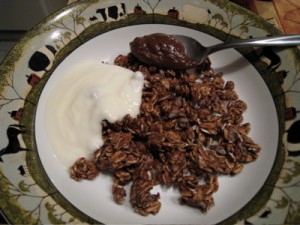 Hi guys! Last night was a late one.

We didn’t get out of SF until after 10pm. After taking Rocks for his evening walk and changing into my jammies it was 11pm. I was wiped out! And hungry. That’s one of the downsides to SF, because it’s a late class I come home needing a snack when I would rather not be eating anything that late at night. I had this along with some water and watched a small amount of TV, then I went promptly to bed. It was so cold last night I had to turn the heat on. Not too high but enough that I wouldn’t be cold during the night. When I went to bed though I was freezing and had to wear my jammie pants and socks to bed! 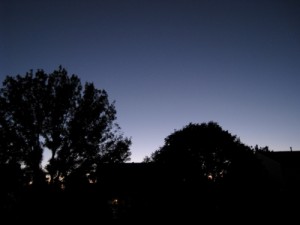 I didn’t sleep all that great. I woke up around 5:30 and couldn’t go back to sleep. I was chilly and I woke up with a monster headache. Ugh! I would have tried to sleep in a bit more but we have an appointment with a service guy and the time frame is anywhere between 8am and noon. Ahem. We got a phone call at 10am confirming our appointment today from 8am to noon. Is that a bad sign when two hours into the “time frame” they are calling to “confirm”?

No run this morning due to crap sleep, headache, and impending service man arrival. So that means no oats. Booo because it was teeth chattering cold this morning and oats would have been nice. 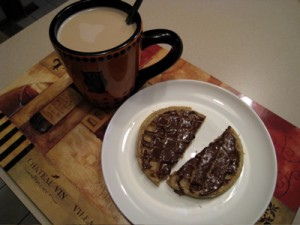 Instead I had a kashi waffle with some dark chocolate PB on it. I should have had two but I wasn’t terribly hungry this morning and was only eating that right away so I could take some ibuprofen for my head. It was yummy though! Had that along with morning coffee + creamer. I love the kashi waffles but don’t love all the sodium that comes with prepackaged food. Isn’t there a way to get around that yet?

In case anyone is curious, the morning pics I take are from my back deck looking towards the houses behind us. I think it’s pretty in the mornings with the two trees and the light just starting to show between them.

I’m off to get more done off my to-do list and not so patiently wait around for the guy to show up. Till later!