Warning: Parameter 2 to WPE\Site_Preview::the_posts() expected to be a reference, value given in /home/customer/www/foodembrace.com/public_html/wp-includes/class-wp-hook.php on line 303
 October 1st, 2008: Lunch and Dinner | Food Embrace

Hi guys! I will be honest, I did not get everything on my to-do list done, but I got most of it! I busted butt around the house today. Close to lunch time I started getting hungry. 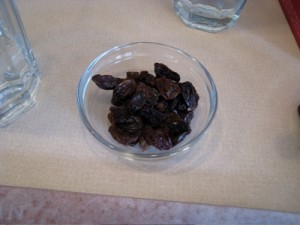 I put out a small bowl of raisins while I worked on lunch. I only had a few because I was chopping and sauteeing. 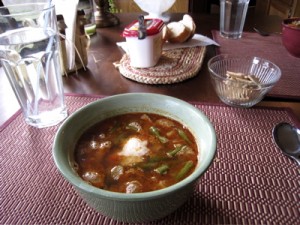 Now I have been trying to keep Wednesdays “meat free” except for chicken broth because I use it in everything. However today it was so gloomy and chilly out that soup was in order. I’m not one for veggie soup, it’s okay but it’s not a favorite. And I didn’t want anything heavy like a bisque or cream soup so I made a soup with some chicken and sun-dried tomato chicken sausage. There were veggies in there, onion, celery, carrots, and green beans. I also added some of the leftover pasta from yesterday’s salads and the roasted chickpeas. It was pretty yummy and hit the spot but not sure I would make it again. I had most of my bowl and some of the kashi crackers. The bread and butter was for Scott.

My side of the office is organized, it’s his side that needs a little help every now and then. 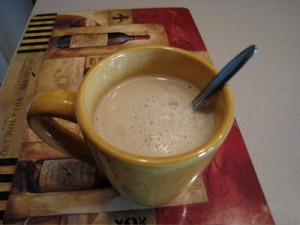 Even though I was running around doing stuff I was still a wee bit chilly and needed something to warm me up. I’m calling this chai latte because that’s what it tasted like even though it’s not really chai. I have Honey Vanilla White Tea by Celestial Seasonings and it tastes and smells exactly like chai. I heated up some vanilla soymilk and steeped the tea bags in the soymilk. Mmmm so good! I will definitely be doing this again. 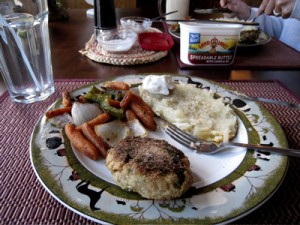 Eventually it was time to stop doing stuff for another day and make supper. I did keep this meat free! We had salmon patties, some roasted veggies (carrots, onions, green peppers, and radishes) and I had half a baked potato with butter, S&P, and a wee bit of sour cream. I ate all my salmon, my potato, and a good bit of my veggies. I tossed the veggies with some olive oil, soy sauce, S&P, garlic powder, and some seasoning blend and roasted them at 425 for about 1/2 an hour. I love roasted veggies, carrots especially.

Cleaned up the dinner mess and now I’m off to get ready for SF class tonight. Unfortunately it will be a late night since class ends at 9pm. I’m hoping to be in bed by 10:30. *fingerscrossed*