Warning: Parameter 2 to WPE\Site_Preview::the_posts() expected to be a reference, value given in /home/customer/www/foodembrace.com/public_html/wp-includes/class-wp-hook.php on line 303
 October 17th, 2008: Breakfast | Food Embrace

Good morning OHCers! Today is Friday and I’m so happy about that I could squee! I had a little bit of white last night in my Halloween glass but there’s no picture because I was still sort of grumpy and Scott got the drinks to try and ease the situation. We caught the last 15 minutes of the Pens game and they lost. I know it’s because I wasn’t able to see the whole game and not because of the way they played.

After the game we watched an episode of Heroes that we taped. Crikey this show is going down hill at a snowball rate! The episode we watched (not this week’s but last week’s) was so awful I think I rolled my eyes no less than 10 times. What is with TV people? They have shows that start off great and then just flat out tank. Bleh. I’m about two shows away from calling it quits. Scott is still interested in watching it but my interest is waning fast. After Heroes I went to bed, it was late and I wanted at least a decent amount of sleep before my run.

I used that whole five minutes this morning to wake up before getting out of bed. Whew! Yesterday turned pretty cold and I figured today would be no different so I dressed in my long sleeved shirt and long pants for my run. I didn’t know if I would need a hat or not but when I took Rocky out it wasn’t as cold as I thought, so no hat needed! 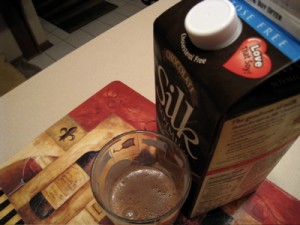 I hit the pavement and as I was running, I’m looking around and things seemed a little too quite. A lot of houses were still dark, no cars were pulling out of the driveways, and no kids were out. Hrmmm My first thought actually was that it was daylight savings and I missed it somehow. But realizing it’s Friday and that happens on weekends, my second thought was that it was some sort of holiday and I didn’t know it. It was really odd that nothing was going on. Because even if there was no school, people should be up and leaving for work, right?

I did my normal route, which I am going to drive this weekend so I can know exactly how far it is that I’m running. I added in a few “sprints” and tried to keep my HR up in the 160s. I think it might be time to add on to the run and go a bit longer. I’m at the point where I’m not super tired or ready for it to end when I get home, and to me that means let’s do some more! I’ll have to do some looking around and see where I can go to add in extra distance. I was ready for that CS though when I got back home! I drank that down and Rocks and I were out the door. And I even remembered to put on an extra sweatshirt for the walk.

As we were out, it was then I realized for sure it had to be a holiday or something because during our walk, we always pass two buses. Today nothing and still no kids out going to school. I cut our walk a little bit because we were both ready to be back home. 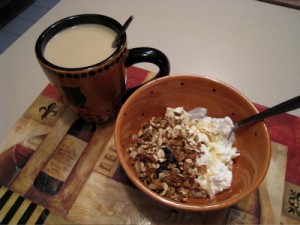 I debated whether or not I was going to do the yoga on the Wii Fit. I’ve been doing that after my runs ever since we set it up and I love it for that. But today I really just wanted to sit down, eat, and drink coffee. I also knew that I could do it a bit later with Scott. However, I made myself do the stretches. That’s really the main reason why I have it, so that I will stretch after my runs. I did 14 minutes of yoga stretching and I’m so glad that I did. And I can still do the other stuff with Scott later. Win win!

Still no bananas, so breakfast was 1/2 cup of 0% Fage, 1/3 cup of homemade granola, and a drizzle of maple syrup for some extra sweetness. I love the Fage but it is a bit tart for me and I do have to sweeten it up. Along side morning coffee, which was coconut today (thanks Scott!) with some creamer.

I have declared today Cozy Home Day (CHD). Which means we are spending the day here and not going out (as in run errands). I also lit some smelly candles already to get the house smelling pretty. I’m going to clean and then I’m going to make dinner so that all I will have to do later is toss it in the oven. Big comfort food dinner today that has been everywhere on blogs and all over Food TV lately. Can’t wait!

Now I’m off to go wakey Scott and get CHD started!

P.S. Found out today is an in-service day for school. But shouldn’t people still have been up and going to work?