Warning: Parameter 2 to WPE\Site_Preview::the_posts() expected to be a reference, value given in /home/customer/www/foodembrace.com/public_html/wp-includes/class-wp-hook.php on line 303
 October 16th, 2008: Breakfast and Lunch | Food Embrace

Wow I know this is such a late first posting but I have a good reason! Starting off with last night, SF class let out at 9:30ish and we got home not too long after. Quick trip around the block with Rocks and then it was time to get in jammies and start the debate. 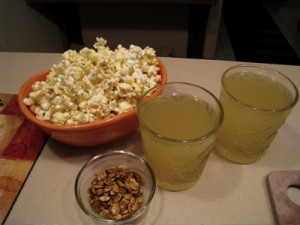 Scott wanted a fizzie so we opened a new bottle of Italian soda to try. We both liked it straight up, so that’s what we did! It was Peach Pear flavor. Yum! And we had some popcorn, which is in a pumpkin bowl; I know it’s hard to tell from this angle. Also, remember the acorn squash we had for dinner? Well I saved the seeds and roasted them. Tossed them in some olive oil, salt, garlic powder, and chili powder. They were pretty tasty. Since we were starting the debate so late (to me anyway) I knew there was no way I was going to make it through the whole thing. And I didn’t. I got the first hour watched but that was it. I had to go to bed as I was falling asleep on the couch! I’m going to have to finish it tonight maybe? I’ll have to see because there’s a Pens game on tonight that I want to watch!

My alarm went off and I got up to go run. As I was in the bathroom I heard the wind blowing really hard and knew that could be trouble. I peeked outside and saw that it was raining. I put Rocky back to bed and went back to bed myself. I got back up at 9am and it had stopped raining by then. After I got Rocky taken care of and made my breakfast, I went back up to wake Scott up. 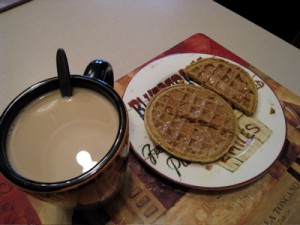 For breakfast I had my morning coffee + creamer, and 1.5 kashi waffles with some PB and honey on top. While I ate breakfast I putzed around on the computer checking mail, blogs, and stuff. Then I changed clothes so I could do some Wii Fit. Scott decided to join me and we worked out for quite some time. Total time logged for me was 40 minutes of actual working out. Can’t count the time spent watching Scott! :p 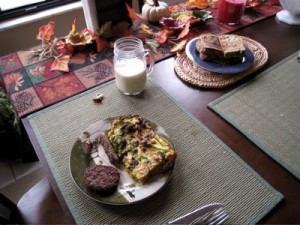 Working out took us way past regular lunch time and when we stopped I was starving! I heated up some of the leftover egg and veggie dish I made for breakfast last Sunday. I also heated up some Morningstar sausages, patties and links. I had one link and one patty on my plate. And the bread is the blues bread I got from Andrea! I had one whole piece and another half of the egg thingie, one sausage patty, and 1.5 slices of bread. The bread had a wee bit of butter on it. I took one bite of the sausage link and realized that I just do not like those at all, so I didn’t eat it. I realize that lunch is pretty calorie dense (at least it feels that way) but I was coming off a workout and since it was later, I wanted a good meal that would help get me through my MT class in a few hours. I will most likely still need to eat something before class, but it should only need to be a small something since lunch was 1. later in the day and 2. pretty substantial.

The weather has certainly gone back to Fall! It’s 50-some degrees right now with a good breeze blowing. When I let Rocky out this morning I was freezing! Had I ran, I know I would have needed to change my outfit because I would have put my summer pants and tee-shirt on. Way too cold for that! I’m pretty surprised at such a drastic drop because yesterday it was in the 80s! :o I’m not complaining though! I love Fall!

I was bummed about no running this morning though.

And I have come to realize that while sleeping in is nice, I sort of feel rushed on time and like the day gets away from me too fast. Which makes sense since I have less hours in order to accomplish things. Speaking of, I have a little cleaning to do before heading to class. See you guys later!