Warning: Parameter 2 to WPE\Site_Preview::the_posts() expected to be a reference, value given in /home/customer/www/foodembrace.com/public_html/wp-includes/class-wp-hook.php on line 303
 Tuesday, September 16th, 2008 | Food Embrace

Up early and still no power. Crap. It was about 8am when I got up and then I got Scott up. In no time we were out the door to get ice and coffee. First up was ice because we needed it badly. We went to the same store where we found ice earlier and they were stocked up again! And they even had huge bags of ice, 22lbs! We bought six 22lb bags of ice. Then it was off to find coffee. We decided to go to Starbucks because we had giftcards to use up. We went to the ‘bucks located in the Target we knew had power. But no ‘bucks! Just the store was open. Panera was right down the road and I knew it was open, so we headed there. I picked up a coffee and asiago cheese bagel. Scott got two large coffees! 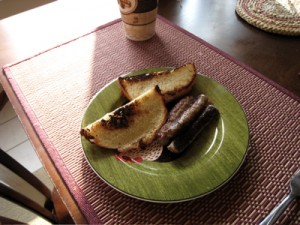 I had cream and sugar in my coffee and left about 1/3 of it, which I then gave to Scott. Breakfast was 1/2 of the bagel and three sausage links that I had cooked up earlier. They were part of the items that thawed out from the upstairs freezer. I put a little butter on the bagel and toasted it up via a skillet. It was sooo good! The asiago cheese bagel is my very favorite bagel. It’s light and airy with a bit of saltiness from the cheese. mmm! However I also know it’s empty calories and not really great as a nutrition source, so I limited myself to half.

Four of the bags of ice went into my standup freezer. And everything in there was still frozen! Not rock solid but not thawed out fully, cold to the touch, and still had some ice crystals on it. Which from previous experience of living without power has taught me is still okay. Hooray! The other two bags went into the bread freezer. Storing them for later when we changed out the ice in the coolers.

Once all that was taken care of we decided to do some cleaning and organizing around the house. All the clothes that we are getting rid of got sorted and photographed. The upstairs office got cleaned out and more organized. The guest room got worked on and a little more organized. During all this time I forgot about lunch! 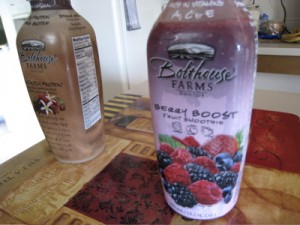 I pulled out some smoothies I picked up at WF. Mine was berry and Scott had a mocha protein one. I drank about half. It was really thick and a little overpowering. I had a sip of Scott’s and that one was really yummy! After our small break it was back to doing more things around the house. More cleaning and organizing. Then it was time to change the ice in the coolers. We had them in the basement. Brought them up and outside to drain off the water. Three coolers total, two large ones and one medium sized. We were bringing the last cooler back downstairs when it sounded like the freezer kicked on. I tested the light switch and we had power! Sweet joy, power! Woo!!

I decided to keep the stuff in the coolers just to be on the safe side. We heard some stories of people getting power for about an hour and having it shut off again. I played it safe. After about two hours when we were sure the power must be hanging around, we moved the food from the coolers back into the downstairs fridge. It was getting cooler quicker than the upstairs fridge.

I opened the standup freezer and did a full check. Things that were closer to the door had thawed a wee bit but they were things that didn’t matter, like shredded cheese. Everything else was just fine. Whew! Thank goodness I didn’t lose any of that or I would have been super upset.

Time to start dinner! Some wings that were in the upstairs freezer had thawed in the cooler. Decided to pull those out and toss them in a quick marinade. Opened up a can of baked beans and heated up some corn to go with the wings. 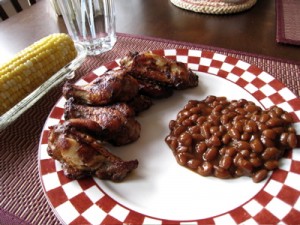 I had five wings, about half of the baked beans and all of the corn. That was the best corn I have had in a long time! It was so sweet and juicy. Both Scott and I had juice running down our chins. Sometimes when I took a bite juice would go flying across the table. :p The wings were marinaded in some soy sauce, olive oil, and various spices like chili powder. I baked them in the oven for about 20 minutes. I did not eat the skin, I pulled that off. 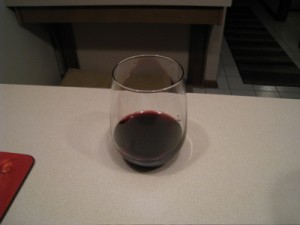 Scott poured us each a small glass of red to celebrate having power. I wasn’t into that much though. After I finished that glass I went back to drinking lots of water. We snuggled on the couch watching The King and I. For the both of us, it was the first time seeing that movie. We didn’t care for it. I loved some of the faux Asian music they used, and the rendition of Uncle Tom’s Cabin, but otherwise the story seemed lacking. 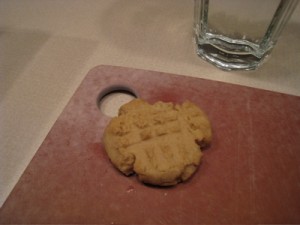 During the movie we each had two peanut butter cookies that had thawed. These cookies are soooo good but not healthy in the least!

One of my goals is to work on some healthier cookie recipes this fall/winter. After our snack I put them back in the freezer because otherwise I would be too tempted to eat them. I love these cookies! I got the recipe from my mom and have changed things just a bit to make them perfect. Now I’m going to work on trying to make them a little more healthy.

After that it was time for bed! Wow what a long couple of days. I was exhausted but looking forward to getting back into routine.