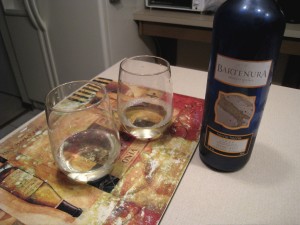 Morning guys! After we left off, I had another 4oz of wine. This time it was a Moscato. This is easily one of my favorite wines. It’s sweet, crisp, and just a touch of fizziness to it. I should probably do a review on it soon. I was so tired last night, I forgot to say so many things in my last post. I didn’t even say what kind of fruit I ate. Doh!

We were watching TV last night, The Contender: Muay Thai, (anyone else watching it?) and I thought it was later than it was. Once I realized it was only 9pm, I was so excited because that meant that I would still make my bedtime of 10:30. Whoo! After the show was over, I went up to read for about a half hour. I try to do that more often now, go to bed and read to help my body calm down and relax so that I get a good night’s sleep.

I was up and ready to get moving this morning. I even got up before my alarm clock! Got dressed and took care of Rocky (fed and got him out for his morning constitutional) then I was off. I did my usual run route, which I’m pretty sure I have reached a point where I can start extending it and making it a bit longer. Then I came back and had about 8-10oz of chocolate Silk. 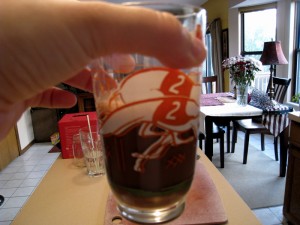 I would have to do some digging to find it, but I know Heather will know what I’m talking about. There were some studies done that showed drinking chocolate milk after a run or intense workout replenishes and refuels the body better than water or sports drinks. I don’t drink milk, so I do the chocolate Silk instead. And while I realize it’s not the same thing, man it tastes awesome after a run! After the drink, I grabbed Rocky and we were out the door for his walk. I use that as my recovery and cool down time.

Back home, I changed out of my workout clothes and came downstairs to make breakfast. 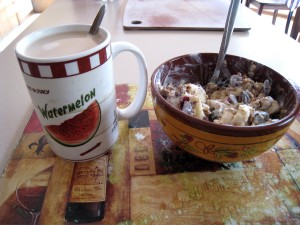 Typical breakfast for me is coffee + creamer and a bowl of homemade granola, topped with one sliced banana, a small handful of raisins, and a small handful of dried cranberries, all combined with 5 spoonfuls of plain yogurt. I did sweeten this tub of yogurt with a bit of honey to help take away the tartness. It’s Stoneyfield Whole Milk Yogurt with cream on top. I don’t care for low fat or nonfat yogurt because the sugar content is high or it has artificial sugars in it which I try to avoid at all costs. Since I’m only eating a few spoonfuls, I figure everything balances out. I’m still on the lookout for some nice greek yogurt to try. My local grocery store doesn’t have any other than the full fat versions and those are super high in fat. They will be my exception and I’ll try the lower fat versions of those.

Just last week I finally got my new range (pics soon!) and I was so excited. My old range was just that, old. And so outdated. It was all gas and the oven took so long to heat up and cook things, it was a pain. It finally gave up the ghost and we had to purchase a new one. I wanted a gas top and an electric oven, which is what I got.

I was without an oven for about a month and a half. When my granola supply was gone I wanted to cry because without an oven, I couldn’t make more. This is my favorite breakfast ever and I eat it every day but Sunday. I broke down and bought some granola at Whole Foods but it wasn’t the same. Don’t get me wrong, their granola is awesome, but only if I eat it straight up. Putting it in yogurt and eating it that way was very unsatisfying. Granola was one of the very first things I did when my new range arrived last Friday.

Okay guys, I’m off to get some more stuff managed for the site and do some sprucing up around the house. I’ll leave you with a song I forgot to post last night. This is one of our favorite songs that is featured in the Bioshock game. We were singing it all day yesterday.