Warning: Parameter 2 to WPE\Site_Preview::the_posts() expected to be a reference, value given in /home/customer/www/foodembrace.com/public_html/wp-includes/class-wp-hook.php on line 303
 September 29th, 2008: Lunch and dinner | Food Embrace

Hey guys! I am worn out!

PT today totally kicked my ass! I did arms, Biceps and triceps and a little abs at the end. I was wrecked but in a good way. :p I was starving for lunch afterwards. I had plans on making big salads for us but then I heard a commercial advertising breakfast and knew that’s what I wanted instead. Since we didn’t have Sunday Breakfast I was missing it! 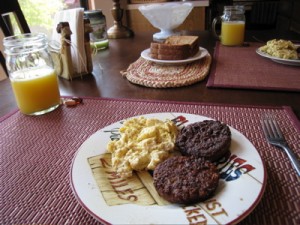 I didn’t even shower first, I went straight for food! I scrambled up three eggs and took 1/3 and gave Scott the rest. Along with two Morningstar sausage patties and 1 1/2 slices of health nut bread with some butter. This was the first time I had those sausage patties and they were okay. Not bad for an alternative to real sausage. I was curious to see what they would taste like because I lurves me some sausage. My only suggestion would be for them to use a little more seasonings and bump up the garlic factor. Aside from that they get a thumbs up from me and I’ll pick them up again. Oh and I had some OJ!

After lunch I took a nice long soak and it was perfect! I was so relaxed after all I wanted was a nap.

I had stuff to do though, so no nappy for me. I started laundry, did some stuff around the house, and worked on some recipes. And then I started getting hungry for dinner. Actually I could have used a snack but since it was so close to dinner, I waited it out. 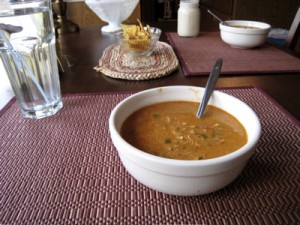 We had leftovers, the soup from yesterday. The only thing I did was add a little bit of chorizo to it and then heated it up. I was so excited to find the sausage! I got it at WF and it was soooo yummy. The previous times I have tried it, the versions that were in my grocery store were not good at all and the store only has one kind which makes no sense. When I spotted these guys I snatched them right up! It made the soup super spicy to me though, I was sweaty and blowing my nose every few minutes. :p Scott of course was fine because he can handle all kinds of spicy hotness. Whew! I was stuffed after dinner.

I’m pulling an early night tonight and will definitely be in bed reading soon. And looking back, I see my only fruit today was a banana from this morning. I’ll have to have some fruit later I think. Hope you guys had a good Monday!