Warning: Parameter 2 to WPE\Site_Preview::the_posts() expected to be a reference, value given in /home/customer/www/foodembrace.com/public_html/wp-includes/class-wp-hook.php on line 303
 September 28th, 2008 | Food Embrace

Hi guys! Another day in review because I was a slacker today and just wanted to veg out. I did some cooking and the experiments didn’t turn out. Boo! I want to start making my own bread but the thought of kneading and all that doesn’t sound too appealing. I have a bread machine so I busted that out today and my bread was a hard little rock.

Oh well, I’ll get it right somehow. On to my day!

Well we have to recap the rest of last night. That consisted of me laying on the couch drinking some wine. I had another glass of red and one glass of white. I also had a small bowl of pumpkin latte! Wooo! 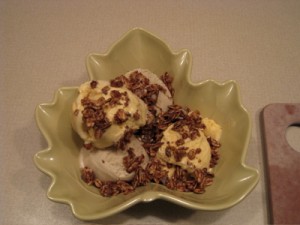 Two little scoops of coffee and two little scoops of pumpkin ice cream. I bumped it up with some bare naked granola to give it a little more nutrition value and to help fill me up a bit as I was a little hungry. The granola tasted the best on the coffee side. Like a mocha latte.

I watched some TV and stayed up too late which seems to be a trend this weekend. Once I hit the bed though I was out cold.

I knew I wasn’t going running this morning because of all the exercise I did yesterday. I needed to give my bod a break so I tried to sleep in as much as I could, 7:45 was all I got. I got up and got Rocky taken care of then did dishes because there was a pile-up in the sink and dirty dishes sitting around drives me crazy. This gave me a chance to let the coffee get nice and hot! 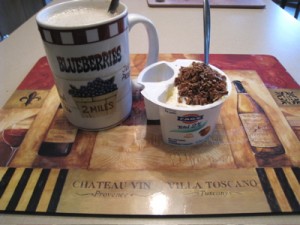 Breakfast was the usual cup of joe and some pumpkin creamer. Mmm! I had a Fage 2% peach with some of the bare naked granola sprinkled on top.

I went to go get dressed to take Rocky for a walk only to realize I didn’t pull out any workout clothes. Doh! I knew I could take him later so it wasn’t too big a deal but I was looking forward to a morning activity. I had way too much energy so I started poking around in the kitchen. That’s when I started the bread machine debacle and then I got lunch going. No Sunday Breakfast today. I still had some of that rotisserie chicken left and it needed used up. I decided to go ahead and make some chicken salsa soup. It was a dreary day today anyway and soup seemed perfect. With the bread going and the soup started that woke Scott up and he drifted downstairs. :p 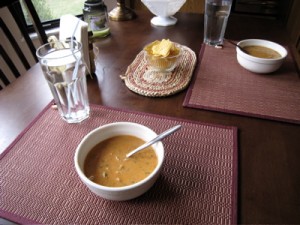 I had a ladle and a half of the soup and a couple of the tortilla chips with it. Yum! I grudgingly went upstairs to change out of my jammies and sort the laundry. We took Rocky out for his walk and I started laundry when we got back. Scott pulled out some of my fall decorations. Hooray! One other box seems to be missing somewhere. I looked through the box to get reacquainted with what was there. I decided to decorate during the week sometime, I wanted to spend the rest of the day with Scott.

Hormones were making me snacky today. I made some good choices though! 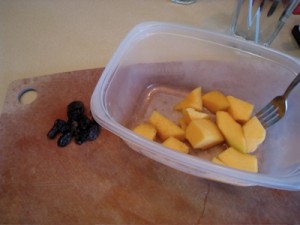 I had a small handful of raisins and the rest of the cantaloupe. Okay, well Rocky had some of the leftover cantaloupe too. 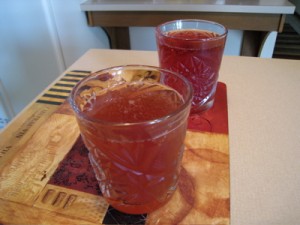 Scott and I played some MetalGear and I made us some drinks while we played. Lime Cranberry fizzies, this time made with lemon lime seltzer and cranberry juice. So yummy! Both of us started getting hungry and since we wanted to take advantage of the really nice weather, we decided to grill. It’s been a while since we’ve grilled, I was excited! 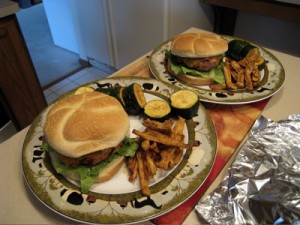 We had turkey burgers which turned out so awesome (recipe soon)! Some sweet potato fries that I seasoned with some olive oil, S&P, chili powder and some cinnamon. On the side was some grilled zucchini that was seasoned with olive oil, soy sauce, garlic powder, S&P. Everything was soooo yummy! I also had another fizzie with dinner. I ate everything on my plate including all of my burger! :o That never happens, I usually eat half a burger but I loved this one so much I ate it before I moved on to anything else. :p

Now I’m sitting on the couch and I think we might watch a movie. Hope you guys had a good weekend! See you tomorrow!