Warning: Parameter 2 to WPE\Site_Preview::the_posts() expected to be a reference, value given in /home/customer/www/foodembrace.com/public_html/wp-includes/class-wp-hook.php on line 303
 September 27th, 2008 | Food Embrace

Hi guys! Wow what a jam packed busy day today was! I’m so ready to crash and relax. Starting where we left off… 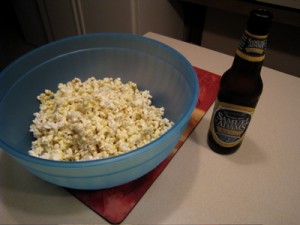 Last night I had some popcorn and a Summer Ale. Scott and I split that bowl while we watched the debates which I thought were boring as hell. I’ve seen much better debates. After that was over we moved on to some shows we taped. I was so sleepy but had another beer. 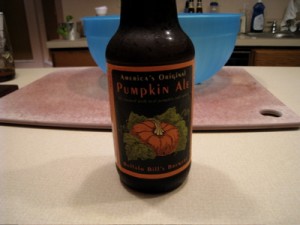 The pumpkin beer was what I really wanted and should have started off with that. I didn’t need two beers especially since it was so late (to me!) already but I had it because that’s what I originally wanted. I went to bed waaaayyy too late, 11:30. Ugh! And I didn’t sleep well at all. I was preoccupied with other things and that spilled over into my dreams and then I kept waking up during the night. Meh. I was dragging this morning when I got up with Rocky who only let me sleep in till 7:45. 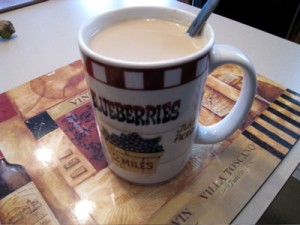 I had my coffee right away even though I knew it hadn’t been sitting for very long and indeed it wasn’t very hot at all. But I needed something to get me going. Then I got hungry and made breakfast. 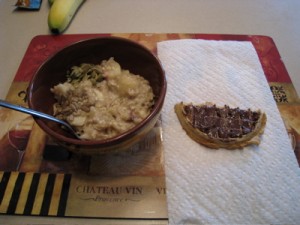 I don’t normally have oats on Saturday mornings but Scott and I had a long day ahead of us and since we wouldn’t get a proper lunch, I needed to fuel up. I had a bowl of regular oats:

And my toppers were sunflower and pumpkin seeds. On the side I had 1/2 a Kashi waffle with some dark chocolate PB which is one of my finds from last night’s run to the store.

Then it was time to head to MT and have a round of class. Class was hard today and we did some pretty interesting drills. They involved catching some front kicks and slamming a round kick back. Sounds easy but really can be tricky. 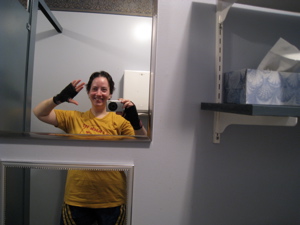 Not the best pic I know.

But that’s what I look like after class. All sweaty goopy. I was in the bathroom to change into a different outfit. Our MT instructor was hosting another instructor today to train us in combat jujitsu after our regular class. Not sport jujitsu that you see in MMA fights, this was real-life, what are you going to do if someone has you on the ground AND they have a knife? Or a gun? 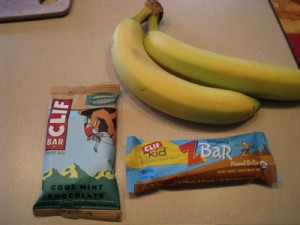 Since the seminar started pretty much right after MT class, that meant that we wouldn’t get a chance to eat lunch. I decided to bring some protein bars and bananas to eat during the time between. I took this pic before we left, is that cheating? I had the mint choco Cliff bar. It was okay. I think the Cliff Z bars might have a better texture. Scott had a banana walnut Cliff bar and I had a small bite of that. It was way too sweet for me, I wouldn’t be able to eat a whole bar of that flavor.

Boy am I glad we ate something because the seminar was three hours long. :o That might not sound like much but when you’re rolling around on the ground, subduing someone, and locking someone up for three hours straight that wears you out!

Our instructors were thoughtful enough to have food for everyone afterwards. I was starving! I already had dinner planned for Scott and I but we each had some food so as not to appear rude. No pics though because there was no way I would have been able to be discreet about it. :p I had a serving of carrots and celery, a small amount of homemade mac ‘n cheese, and some crackers which I have no idea what they were. Oh and I had a serving of banana peppers. I can’t pass those up, I love them! I drank water that I brought from home with my meal. There was some sort of dip thing that I had a few bits of with my crackers and veggies. I have no idea what that was or what was in it so I didn’t have too much.

By the time Scott and I got home it was 5:30. Looonnnngggg day! Rocky was happy to see us but mostly he wanted fed as this was cutting into his supper time. :p After we both showered I started dinner. 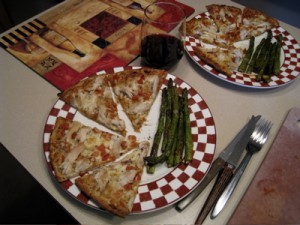 Nothing fancy, I heated up a Kashi margarita pizza (another find at the store!) and added some rotisserie chicken to it. I also roasted up some asparagus in olive oil, soy sauce, pepper, garlic powder, and some chili powder. Along with a glass of red. Everything was yummy! The asparagus roasted up nicely with the tips getting crunchy and caramelized. Mmmm! We watched some TV while we ate. Then I stopped to post the entry.

Now I think we’re going to watch a movie. I may make another snackie only because that pizza was very thin and the meal didn’t really fill me up too much. It could be because my eating schedule was off today as well. I’m still deciding what to do. I’m in my jammies and ready to relax though! See you guys tomorrow!