Warning: Parameter 2 to WPE\Site_Preview::the_posts() expected to be a reference, value given in /home/customer/www/foodembrace.com/public_html/wp-includes/class-wp-hook.php on line 303
 September 23rd, 2008: Lunch and dinner | Food Embrace

Guys, I had the best food day today! So many yummy things! 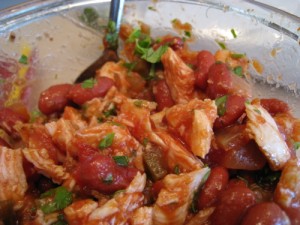 When lunch rolled around I was starving. I could not wait to eat! I wanted something big and knew I had to use up the last of the leftover turkey. I didn’t want to throw it away. After thinking about it for a bit I decided to make a wrap using the leftover turkey, some kidney beans for extra protein and fiber, and the rest of the jar of salsa sitting in my fridge (about 1/2 cup). I mixed that all together with some cilantro and lunch was born! 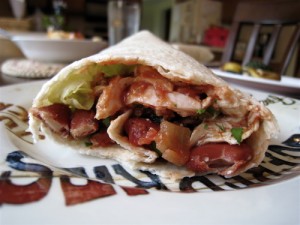 I chopped up some romaine and laid that down then put the turkey mixture on top and rolled it up. Holy cow this was awesome! It was light and cool but a very filling meal. I will definitely be making this again. I know they are blurry, but in the background are leftover zucchini and squash and some cantaloupe and peaches. I ate all of my wrap except for a few bites at the end which was just tortilla, most of the squash/zucchini, and a few bites of the fruit duo. I wish I had leftovers of this. It would be great to just mix in with a salad too! Maybe add some corn in there as well.

After lunch I had some projects to look into and I worked on those for a bit. Then I put on food TV to see what was happening. I saw Aunt Sandy in a baby blue terrycloth running suit making some appetizers. One of the ones she made drove me nuts. It involved spinach and filo dough. She easily could have made this more healthy and made it homemade without using pre-made stuff. I’m thinking I’m going to have to create my own version just to show it can be done. :p Then Ina was on.  I haven’t seen a new Barefoot show in ages. The one last night was one I have seen way too many times. 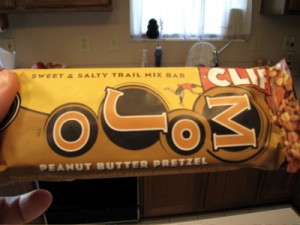 I thought I could get away without eating something before MT but my body told me that wasn’t going to happen. Scott decided he was going to try his new Kashi Go Lean high fiber and high protein cereal. He loved it. And came back for seconds. I told him to be careful because too much fiber can have undesired results. “Bah!”, he said with a wave of his hand. “Ooookay” and I went about trying this Clif bar. I was immediately interested because it was all about peanut butter and I lurves me some PB. Love it! This had peanuts, and PB chips, and PB filled pretzels. I’m all over it. 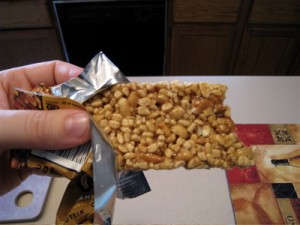 Here’s what it looks like and missing a bite. I have to say I was very unimpressed. If you gave this to me and didn’t describe it at all, I would have no idea that PB is supposed to be the main ingredient. Very low PB taste. I have another one in the pantry and after that’s gone I probably won’t get it again. However, like a good Clif bar it filled me up and powered me through MT class.

Speaking of which, it was hard! My legs just did not want to go last night. I did my 3 minute run and did the 2 minute jump rope but I knew I was going to pay for it later. And I did. After I got home and showered, I put Thai Oil all over my quads. And had Scott put it all over my back and shoulders. I knew my muscles were going to get stiff but I wanted to prevent them from getting too stiff as best I could. In case you’re wondering, when I say Thai Oil, I mean this: 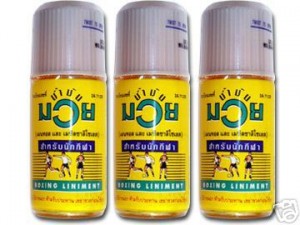 I should have just taken my own pic but I’m lazy. :p It’s mostly menthol so it’s warm when you put it on. Most people feel super heat when they apply it, like it’s burning. It doesn’t affect me that way, it’s only slightly warm to me. However, it works! It loosens up muscles and helps keep my bruises from getting too nasty looking. Those who aren’t used to it think it stinks. I love it though.

After my shower it was time to make dinner. Everything was an experiment! 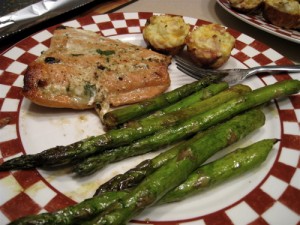 I took this picture in the kitchen instead of at the table because it was dark last night and I wanted it to turn out well. Dinner was some salmon that I marinated in some WF wasbi dressing, cilantro, and some soy sauce. Then I sauteed it in a skillet. The sides are two wee potato puffs, recipe soon. And some roasted asparagus that had some olive oil, soy sauce, S&P, garlic powder and some curry powder. Everything was sooo yummy and I ate everything on my plate. Mmm!

Remember when I cautioned Scott about his over indulgence with the new cereal? Well it came back to haunt us at dinner time. Phew! I think he’s learned his lesson though.

After dinner was cleanup and then I tried getting this post done while Scott was getting stuff together for trash night. However, my computer was being a dinkus and running slow. I got tired and needed to head to bed, so I pushed it off till this morning.