Morning guys! Super quicky post this morning because I need to get moving and get ready for MT. Breakfast was oats again! 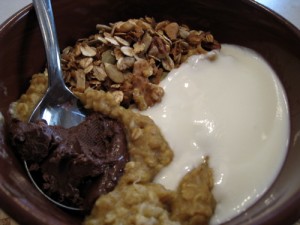 I needed to make a big breakfast that would hold us over a bit. After MT class, Scott and I are heading over to the Columbus Convention Center for their Health and Lifestyle Expo. Our MT school is putting on a demo there and we are participating. Because of the time of the demo, we won’t have time to come back home first and get something to eat. So hence the big breakfast plus I’m packing along some snacks.

My oats were the same as yesterday with the addition of Nutella! I have been wanting to add chocolate chips to my oatmeal for a while now but I don’t have any and I keep forgetting to pick some up at the store. Then I had an epiphany this morning, Nutella! Hooray! I added a big scoop. It was yummy! I do think the Nutella got a little lost though. I could taste it but it wasn’t as prominent as I would have liked. 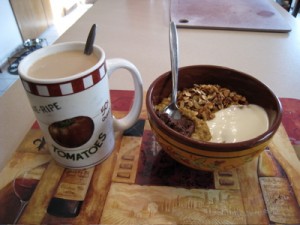 And of course I had that along side my coffee + creamer. I had a good bit of coffee left but only a couple bites of oatmeal left. I’ll pack some bananas and protein bars for us to eat later. And I’ll bring my camera too! See you guys later!