Hey guys! It’s been a productive day so far! Hooray!

I had no idea what to do about lunch. I wasn’t in the mood for a salad and there was no lunchmeat. Veggies are running low and I had no idea what to make. As I was poking around I found some Lean Cuisines we had bought a while back, so I popped those in the micro for us. 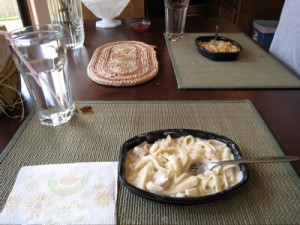 As they were heating up I decided to take a look at the ingredients to make sure there was no HFCS listed and thankfully there was not. However what I did find was nasty and I will never be buying these again. Ugh! Naturally I cannot find the label online for the one I ate so you’ll just have to trust me. I had the chicken fettucini and listed in the ingredients it said chicken tender pieces and then parentheses with a whole bunch of stuff listed for what makes up the chicken. Examples being tapioca starch and corn syrup solids. Ewww Whaa? Why can’t it just be plain chicken? And transfats and all kinds of other stuffs. Yuck. No more! I need to start being way more vigilant about what we are eating.

That didn’t fill me up and I was poking at most of it since I didn’t really want it anymore, so I had a red delicious. 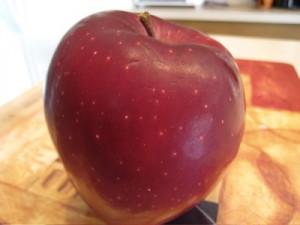 After lunch I brought the newly painted bedstands (am I the only one who says bedstands? Sometimes I say nightstands but usually bedstands) up to the front room to be photographed and then it was on up to the bedroom. 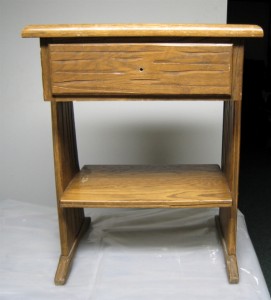 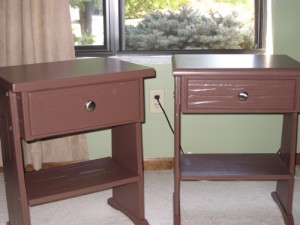 Tada!! We have had these ever since Scott and I first moved in together coming up on 10 years ago! His parents gave them to us. I have no idea where they got them but they crack me up. They are supposed to be matching but they don’t match. The concept is the same but you can see the different drawer sizes, the legs are a little different, the tops are different. Everything is different yet they are the same.

I want new bedstands but cannot find any I like. Either they are too small or they have no shelf, or there’s no drawer. Or they are over $100 a piece. Sorry but I’m not spending over $100 each for a bedstand. So I painted this a dark chocolate brown. I have a big mirror that I painted and needs a second coat and then I am painting my vanity stand and chair this same color. I’m trying to get everything to match and be pretty in our bedroom.

I also dusted today and mopped the kitchen floor. I’ve been busy! 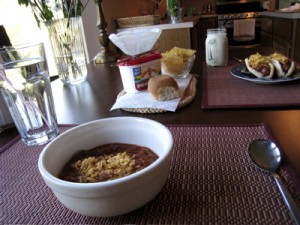 Dinner for me was leftovers. I had a small bowl of chili and the roll with a small amount of butter on it. Scott wanted chili dogs so that’s what I made for him. I had no idea how to make one as I have never had one before. So I put some chili and cheese down inside the bun, the hotdog (which was from WF ), and then topped that with more chili and cheese. He had tortilla chips on the side, I figured that was an okay side dish. It’s chili dogs after all. I had about six tortilla chips, three while the chili was heating up and three at the table.

Ugh, I’m so ready for this week to be over! It’s been long and icky and it’s making me a wee bit crabby. Tonight I have grand plans of laying in bed and reading. Hopefully we won’t be kept too late at stick fighting class tonight.